KuppingerCole presented the European Identity & Cloud Awards 2016 last night at the 10th European Identity & Cloud Conference (EIC). These awards honor outstanding projects and initiatives in Identity & Access Management (IAM), Governance, Risk Management and Compliance (GRC), as well as Cloud Security. Numerous projects were nominated by vendors and end-user companies during the last 12 months. The winners have been chosen by KuppingerCole analysts from among the most outstanding examples of applications and ideas in the areas of IAM, GRC, and Cloud security. Additionally, two Special Awards have been given. 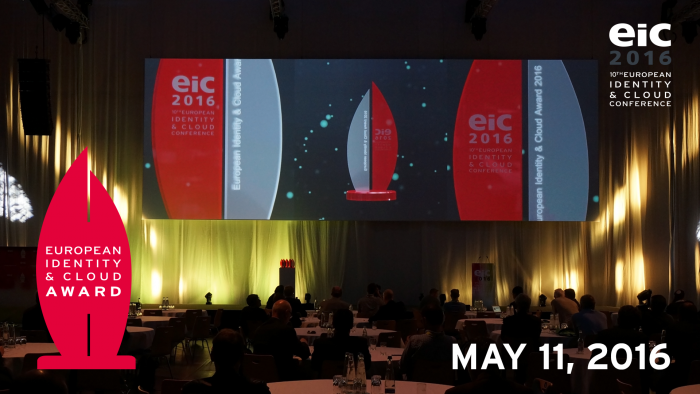 In the category Best Innovation / New Standard, the award was granted to STIX, TAXII & CybOX. They enable cyber threat intelligence data to be shared among trusted partners and communities. Originating as a community project sponsored by the US Department of Homeland Security, STIX, TAXII, and CybOX are now being advanced as international standards via the OASIS open standards consortium.

The European Identity & Cloud Award for the category Best Innovation in eGovernment / eCitizen went to UK Government Digital Services (GDS) which has added a new verification service called GOV.UK Verify. This service is a simple way for UK citizens to access an increasing range of UK government services online. UK GDS is awarded for its continued efforts for enabling citizen IDs for access to a variety of services.

Another award has been given to TomTom in the category Best Consumer Identity Project. TomTom has initiated a program for delivering a new identity platform that manages identities of customers and devices worldwide at very large scale. The identity platform is a global solution. It is a great example of a way to manage all identities ─ of peoples, devices, and things ─ in a consistent way.

The award for Best Approach to Improving Governance and Mitigating Risks in 2016 went to the Qvarn-Platform. The Qvarn Platform is a free, open source solution for managing the professional identities of today’s moving workforces. It handles the security challenges in that area in an innovative way. Qvarn is currently used to serve the construction industry in the Nordic and Baltic regions, and is designed for Pan-European use.

dm-drogerie markt again achieved the award for the Best IAM Project for their integration of SSO and the use of RFID tokens for authentication. The RFID token enables users in branch offices to not only access the workstation, but at the same time provides access to all relevant applications via SSO. Using RFID tokens for personal identification and SSO allows full traceability of workstation and application accesses. Such applications of IAM in retail stores are still rare.

Finally, the Taqanu Bank received the Special Award for Responsive Innovation for building a blockchain based, mobile bank aimed at people without fixed addresses.

The Special Award for Best Project in Research was given to Leeds Beckett University & III Taiwan for implementing a Cloud Computing Adoption Framework (CCAF) as part of the large scale systems between universities and industries.

The European Identity & Cloud Awards honor projects that promote the awareness for and business value of professional Identity Management and Cloud Security.