In the last week of November I attended the AWS re:Invent conference in Las Vegas – this was an impressive event with around 32,000 attendees. There were a significant number of announcements at this event; many were essentially more of the same but bigger, better based on what their customers were asking for. It is clear that AWS is going from strength to strength. AWS announced many faster compute instances with larger amounts of memory optimized for various specific tasks. This may seem boring - but these announcements were received with rapturous applause from the audience. This is the AWS bread and butter and just what many customers are looking for. The value of these improvements is that a customer can switch their workload onto one of these new instances without the need to specify, order, pay for, and await delivery of new hardware as they would have had to do for on premise equipment. Continuing on that theme - James Hamilton, VP & Distinguished Engineer – described the work that AWS does behind the scenes to deliver their services. The majority of AWS traffic runs on a private network (except in China) this guarantees: improved latency, packet loss and overall quality, avoids capacity conflicts and gives AWS greater operational control. AWS designs and manages its own network routers, its own custom compute nodes to optimize power versus space and even its own custom power utility controls to cater for rare power events.

You may think - well so what? The reason why this matters is that an AWS customer gets all of this included in the service that they receive. These are time consuming processes that the customer would otherwise have to manage for their on premise IT facilities. Furthermore these processes need specialized skills that are in short supply. In the opening keynote at the conference, AWS CEO Andy Jassy compared AWS with the “legacy software vendors”. He positioned these vendors as locking their customers into long term, expensive contracts. In comparison he described how AWS allows flexibility and works to save customers’ money through price reductions and customer reviews.

However, to get the best out of AWS services, just like most IT technology, you need to exploit proprietary functionality. Once you use proprietary features it becomes more difficult to migrate from that technology. Mr. Jassy also gave several examples of how customers had been able to migrate around 13,000 proprietary database workloads to the AWS database services. While this shows the care that AWS has put into its database services it also slightly contradicts the claim that customers are being locked-in to proprietary software.

Continuing on the theme of migration – while AWS is still strong among the “born on the cloud” startups and for creating new applications, organizations are increasingly looking to migrate existing workloads. This has not always been straightforward since any differences between the on premise IT and the AWS environment can make changes necessary. The announcements previously made at VM World that a VMWare service will be offered on AWS will be welcomed by many organizations. This will allow the many customers using VMWare and the associated vSphere management tools to migrate their

workloads to AWS and while continuing to manage the hybrid cloud / on premise IT using the tools they are already using.

Another problem related to migration is that of transferring data. Organizations wishing to move their workloads to the cloud need to move their data and, for some, this can be a significant problem. The practical bandwidth of communications networks can be the limiting factor and the use of physical media introduces security problems. In response to these problems, AWS have created a storage device that can be used to physically transfer Terabytes of data securely. This first of these devices, the “AWS Snowball”, was announced at AWS last year and has now been improved and upgraded to the “AWS Snowball Edge”. However, the highlight of the conference was the announcement of the “AWS Snowmobile”. This is system mounted in a shipping container carried on a transport truck that can be used to securely transfer Exabytes of data. Here is a ‘photo that I took of one of these that was driven into the conference hall. 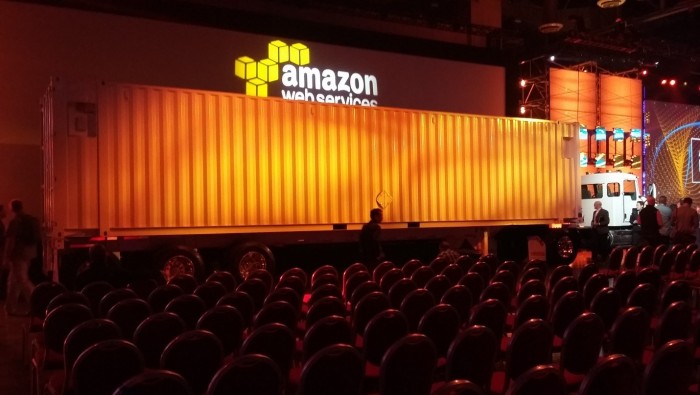 So, is this just an eye-catching gimmick? Not so according to the first beta customer.  The customer’s on premise datacenter was bursting at the seams and could no longer support their expanding data based business.  They wanted to move to the AWS cloud but it was not practical to transfer the amount of data they had over a network and they needed an alternative secure and reliable method.  AWS Snowmobile provided exactly the answer to this need.

Last but not least, security -  at the event AWS announced AWS Shield.  This is a managed Distributed Denial of Service (DDoS) protection service that safeguards web applications running on AWS.   The value of this was illustrated in an interesting talk SAC327 – “No More Ransomware: How Europol, the Dutch Police, and AWS Are Helping Millions Deal with Cybercrime”.  This talk described a website set up to help victims of Ransomware attacks recover their data.  Not surprisingly, this site has come under sustained attacks from cyber-criminals. The fact that this site has withstood these attacks is a confirmation that AWS can be used to create and securely host applications, and that AWS Shield can add an extra layer of protection.

In conclusion, this event demonstrates that AWS is going from strength to strength.  Its basic value proposition of providing cost effective, flexible and secure IT infrastructure remains strong and continues to be attractive.  AWS is developing services to become more Hybrid Cloud and enterprise friendly while extending its services upwards to include middleware and intelligence in response to customer demand.