Hype topics are important. They are important for vendors, startups, journalists, consultants, analysts, IT architects and many more. The problem with hypes is that they have an expiration date. Who remembers 4GL or CASE tools as an exciting discussion topic in IT departments? Well, exactly, that's the point...

From that expiration date on, they either have to be used for some very good purposes within a reasonable period of time, or they turn out to be hot air. There have been quite a few hype topics lately. Think for example of DevOps, Machine Learning, Artificial Intelligence, IoT, Containers and Microservices, Serverless Computing, and the Blockchain. All of these will be evaluated against their impact in the real world. The Blockchain can even be called a prototype for hype topics. The basic concept of trust in hostile environments through technology and the implementation of crypto currencies laid the groundwork for an unparalleled hype. However, there are still no compelling new implementations of solutions using this technology, which any IT-savvy hype expert could refer to immediately.

This week I attended the Berlin AWS Summit as an analyst for KuppingerCole. Many important (including many hype) topics, which have now arrived in reality, were looked at in the keynotes, combined with exciting success stories and AWS product and service offerings. These included migration to the cloud, big data, AI and ML, noSQL databases, more AI and ML, containers and microservices, data lakes and analytics, even more AI and ML and much more that is available for immediate use in the cloud and "as a service" to today's architects, developers and creators of new business models.

But if you weren't attentive just for a short moment, you could have missed the first appearance of the Blockchain topic: at the bottom of the presentation slide about databases in the column "Purpose-Built" you could find "Document-DBs", "Key-Value"-, "In-Memory-", "Time series-" and Graph databases as well as "Ledger: Amazon QLDB".

Even the word "Blockchain" was missing. A clear technological and conceptual categorization.

Behind this first dry mention is the concept of QLDB as a fully managed ledger solution in the AWS cloud, announced on the next presentation slide as "a transparent, immutable, cryptographically verifiable transaction log owned by a central trusted authority" which many purists will not even think of as a Blockchain. Apart from that AWS provides also a preview of a fully managed Blockchain based on Hyperledger Fabric or Ethereum.

This development, which has of course already manifested before in several other comparable offers from competitors, is not the end, but probably only the beginning of the real Blockchain hype. It proves that there is demand for these conceptional and technological building blocks and that this technology has come to stay.

This clearly corresponds directly and stunningly accurate to the development depicted in the trend compass for Blockchain and Blockchain Identity that Martin Kuppinger presented in this video blog post. Less hype, less volume in investment, but much better understood. 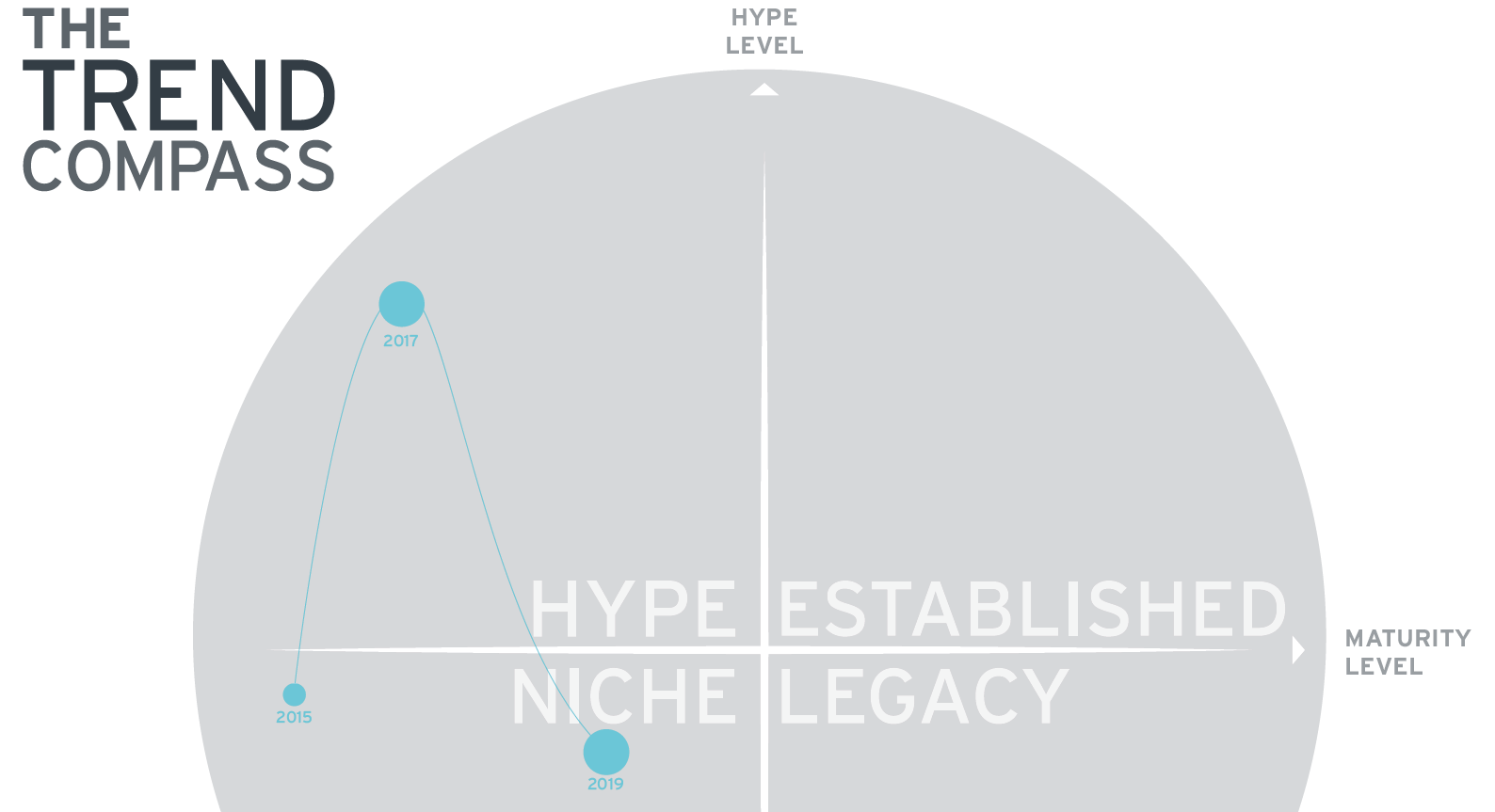 Like every good hype topic that is getting on in years, it has lost a bit of its striking attractiveness to laymen, but gained in maturity for IT, security and governance professionals. In practice, however, it can now play a central role in the choice of the adequate tools for the right areas of application. And we will for sure need trust in hostile environments through software, technology and processes in the future.

The QLDB product offered by AWS and the underlying concept cited above is certainly not the only possible and meaningful form of Blockchain or decentralized, distributed and public digital ledger in general. But for an important class of applications of this still disruptive technology another efficient and cost-effective implementation for real life (beyond the hype) becomes available. Having the Blockchain available in such an accessible form will potentially drive Blockchain in a maturing market on to the upper right sector of the trend compass, as an established technology with substantial market volume, even if might not even be called explicitly „Blockchain“ in every context.