The European Identity & Cloud Awards 2014 were presented last night by KuppingerCole at the 8th European Identity & Cloud Conference (EIC). These awards are honoring outstanding projects and initiatives in Identity & Access Management (IAM), Governance, Risk Management and Compliance (GRC), and Cloud Security. Numerous projects have been nominated by vendors and end-user companies during the last 12 months. Winners have been chosen by KuppingerCole analysts among the most outstanding examples of applications and ideas in the areas of IAM, GRC, and Cloud security. Additionally, one Special Award and the Lifetime Achievement Award have been given. 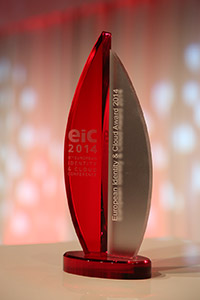 In the category Best Identity and Access Management Project, the award was granted to the UK Ministry of Defence for a project that enables flexible collaboration between suppliers, including small vendors.

The European Identity Award for the category Best Access Governance and Intelligence Project goes to Banca Intesa Beograd. They implemented an Access Intelligence solution that provides insight into access risks not only for IT administrators, but for the various business departments. Thus, the workload for producing reports on access rights and risks for both auditors and the business is significantly reduced.

Another award has been given to NXP Semiconductors, based in the Netherlands. The category of this award is Best Cloud Security Project. NXP Semiconductors has implemented a Cloud-based IAM solution, managing access of users to a number of Cloud applications, based on a Cloud service provided from within Europe and thus avoiding legal and regulatory complexity.

The award for Best Innovation/New Standard in Information Security in 2014 goes to Kantara Initiative for the UMA (User Managed Access) standard. This new standard allows users to regain control over their data and has a significant potential for improving privacy on the Internet.

In addition, there has been a Special Award for Best Innovation for Security in the API Economy. The API Economy describes fundamental changes in the way organizations and systems interact over today's Internet, based on machine-to-machine communication via “Application Programming Interfaces” (APIs). The award went to IETF (Internet Engineering Task Force) for the new JWT/JOSE specifications that build the ground for secure API-based communications and is essential for future secure mobile communications and the IoEE (Internet of Everything and Everyone).

Finally, KuppingerCole presented the Lifetime Achievement Award to Ann Cavoukian, Information and Privacy Commissioner for Ontario, Canada. Ann Cavoukian has developed the concept of “Privacy by design” that describes fundamental concepts for privacy and seeks to proactively embed privacy into the design specifications of information technology, organizational practices, and networked systems.

Chief of Staff / Head of Events