Baking your core competency into an open API is a economic imperative.

If you are not engaged in generating or enabling open API’s for your business—you are not in the game.

Ubiquitineurs don’t litigate or file for patents. Litigation and patents are the tools of the purveyors of scarcity.

I talk to my buddy and visionary Doc Searls almost everyday. He is busy writing his new book about the Intention Economy: When Customers Take Charge. The book is the long expected follow up on his first co-authored work: The Cluetrain Manifesto.

While we talk, we often riff on ideas and things we have read or heard. We have been doing this now off and on for twenty years so we have a language and process that lets us get right to the meat of things quickly. It’s fun. When Doc gets on a rant I just shut up and listen. It’s like listening to Stevie Ray Vaughn riff with words.

One more thing: This post is the first instance of a new term. The term is Ubiquitineur. The definition of ubiquitineur is: Ubiquitineur—An entrepreneur whose business and innovation practices are ubiquity-based as opposed to scarcity-based.

Here is my point.

We are riffing on three core things that make the Intention Economy work. Surprisingly one of them isn’t social computing. They are:

Here is why Kynetx (or possibly other cloud/API-centric code platform) rocks for the Intention Economy rapid prototyping and apps.

Traditional languages are playing catch-up to this. (I like the precepts of the new Dart language spec from Google. It needs to be evented though. Plus is doesn’t have key management as an intrinsic.)

Current telcos are ripping us off for data access. Competition and common sense ( of which little is found in telcos today) will change this. For example look at what Ting.com is doing with providing no frills pay as you go telephony services over the Sprint Network.

Mobile device data access is fundamental to the Intention Economy.

This a new category of technology that is just emerging. Call the personal data ecosystem, or personal data store or architecture, whatever, the point is a place in the cloud where you can store and control information about you.

There are a lot of players emerging in this space. The two I am going to mention are Jeremie Miller’s Singly.com project and the Cloudmine.me service.

To be honest I haven’t used either of them yet, but the precepts in Jeremie’s vision are spot on plus he has gathered an all star group that are likely to do something that will either rock or give us much to think about if it tanks.

I will be playing with the Cloudmine stuff shortly and let you know what I think. So far I like everything there. The one exception is their terms of service. It doesn’t really effect me, but I think they are missing out on the benefits of clear ubiquity-based thinking when the contractually prevent anyone from creating a compatible service.

This is specifically to the Cloudmine folks but it applies to anybody. If you get enough inertia to attract someone interested enough to start copying your protocol, rejoice—things are good. Litigation is not your friend. Litigation is the tool of the purveyors of scarcity. Protectionism is contrary to what you are trying to accomplish. It is contrary to the laws of ubiquity. You have an alignment problem there. Ubiquitineurs don’t litigate or register for patents.

The API Economy is not something that is going to happen. We are already in full swing.

Look at the numbers published by  the folks at the Programmableweb earlier this month when they hit the 4000 API mark. 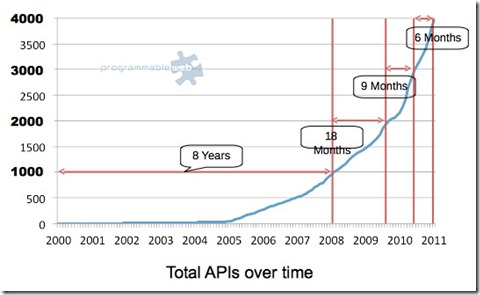 Get with it. Figure out your API strategy. Understand the API Economy Troika and how it relates to what you are doing.

What more point. If you don’t know by know I will end with another quote that is not so provocative and should be obvious:

Digital Identity is core  to all this stuff.