As I said in an earlier post, the folks as Programmableweb.com announced the that the number of open APIs they track reached an unbelievable number—4000—in record time.

The published this graph showing the hockey stick growth rate: 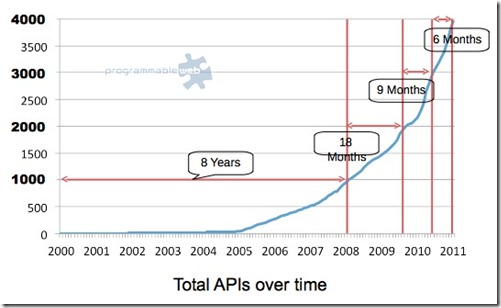 So lets take quick look at the dynamics of this growth rate.

Phil Windley helped me out and here is what we came up with.

The data could be interpreted as a power law. 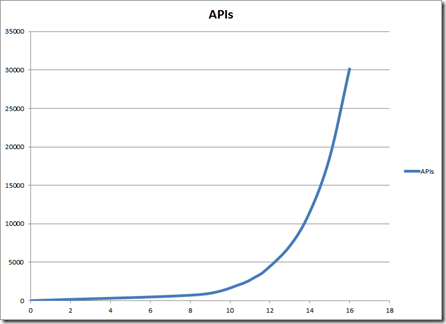 But I am going to go out on a limb and predict that something even more dynamic is in play. If you look at Figure 3, you can see that somewhere between Oct. and Nov. 2010, the growth Netflix was enjoying took a serious turn for the better. Hits on the API went from 4 billion a month to 12 billion in 30 days. 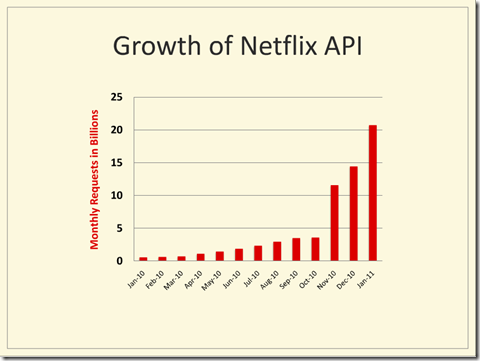 If I am right, I expect that we hit the 5000 API mark sometime in mid 2012. Then instead of just going on the power curve to 7117 APIs by 2013, the industry will experience an exponential skip—like the one in figure 3 for Netflix—the jump will go from 5,000 to over 10,000 almost over night. So that we will be way ahead of this ambitious curve shown in Figure 2.

I have no real data to support that. I just think the movement is about to jump the chasm from early adopters to early majority sometime in 2012.