At the first of the month I attended IIW 14 in Mountain View. I also attended the VRM workshop on the 30th. The VRM workshop was hosted by Ericsson. The IIW was held at the Computer History Museum.

Before I summarize what happened at those events, I want to give a little background on IIW.

IIW uses a format referred to as an “unconference.” The main purpose of an unconference is to avoid the traditional design of a conference. A way I have heard it described is the format developed by Harrison Owen. Legend has it that Owen noticed that during a conference, most of the real activity and deals were going on out in the hall during the breaks.

He questioned “why can’t we create a conference that works like being out in the hall all of the time?” IIW is more about that.

Here are the main operational points:

In the morning of the first day, everyone attending introduces themselves and tells all of the other attendees who they are, who they represent, why they are there and what they expect to get out of the conference.

After that, anyone is invited to create a session and a topic. Each person with a topic stands up and says what the topic is and the purpose of the session. Everyone then rushes to the open space scheduling wall and gets a particular space and time slot during the day. This is self-managed. Figure 1 shows a portion of the scheduling wall. 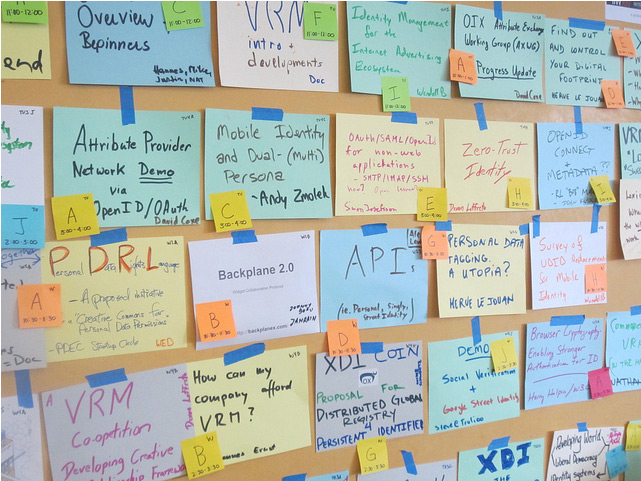 Each time slot is 50 minutes long. Each session starts at the top of the hour. Anyone can attend any session they desire.

At the end of the day, the session leader—or someone that attended the session—gives a summary of the session. Session notes are to be emailed and posted on the IIW Wiki later.

In closing, there is an acknowledgement ceremony. 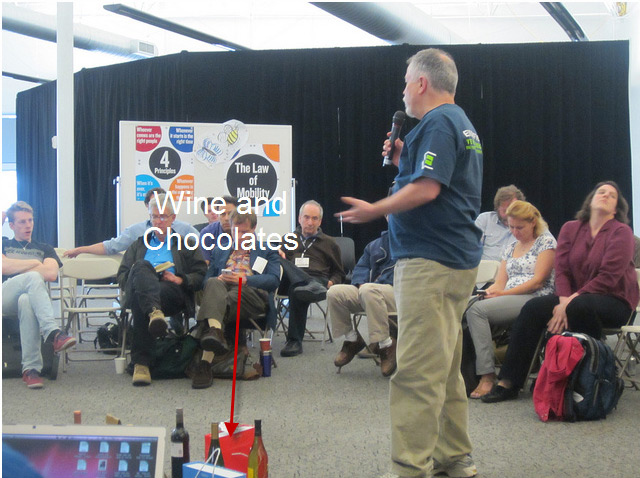 In this ceremony, anyone is invited to stand up and acknowledge anyone else for anything that is relevant to the workshop. This is done by giving the person a choice of wine or chocolates. Figure 2 shows the acknowledgement ceremony and shows Doc Searls acknowledging someone.

Each day then follows the same format except that only new people who did not introduce themselves the first day are introduced.

The entire day was discussing projects and products that are finally starting to use VRM as their underpinnings.

We also talked about Doc Searl’s new thinking about VRM. The best place to review that is by watching his presentation given at the KuppingerCole EIC 2012 conference.

Here were some of the topics discussed.

This year’s sessions were very diverse, but there were some consistent themes every day. For a complete list of all of the sessions, you can look at the IIW wiki at http://iiw.idcommons.net/IIW_14_Notes

There were more VRM sessions this year than I have ever seen. I attribute this explosion of sessions to the release of Doc’s Book—The Intention Economy. Usually there was an entire day of VRM sessions every day of the workshop. On the first day, I attended almost all of the sessions. The VRM community is very broad and does not lean so much on Doc for its progress. Everyone was very excited about the book and the concepts there.

In several of the sessions I focused on the link of the Open API Economy, the Life Management Platform and the roles of these two trends as they relate to VRM. From our opinion at KuppingerCole it is important to point out that VRM is much more than the counterpart to CRM and includes many more things that just e-commerce and shopping. People were very responsive to these perspectives.

Another cool result of all this is the new post that Doc Searls put up on the VRM Wiki adding and attributing KuppingerCole to the term Life Management Platform.

There was much talk about APIs and Open APIs. The Open API Economy session was packed and generated great discussion.

The link to my Prezi used in the session is here.

Almost a thousand people (998) have viewed this presentation since the workshop – I’m really impressed.

Other API discussions were around OpenID Connect and SCIM.

The three most active protocol discussions centered around OpenID Connect, SCIM and XDI. In addition, every discussion talking about any type of service, from privacy to personal data stores, talked about their status and intent to provide API access.

The Open API meme is clearly on fire and KuppingerCole is viewed as the thought leader around this topic.

The entire community is very excited about Open ID Connect and SCIM as they are protocols seen to solve serious problems, programmatic access to endpoints through the SAML namespace, and programmatic protocols for automated provisioning.

There was a lot of discussion concerning privacy and the meaning of privacy. Scott David contributed significantly to this discussion with legal definitions and implications. The question kept coming up on how to build products that satisfy personal and legal privacy requirements across international boundaries. Especially since the requirements, laws and social conventions are not well defined. Again, KuppingerCole’s approach of Life Management Platforms provides some interesting thoughts (and maybe answers) on that.

The meme about Personal Data is very much on the move and in flux. Almost everyone who says they are working with Personal Data has a different notion of what it is and how it should work.

One of the presenters opened with a great joke from Steven Wright that is a useful analogy about personal data. It goes “I have a large seashell collection which I keep scattered on the beaches all over the world. Maybe you’ve seen it.”

One of the most fun and interesting personal data sessions was around the freedom box. Markus Sabadello managed this session.

This link gives a review of the session. He also brought up the Life Management Platform. He didn’t quite get it right, but I like it that the term is being inserted in the discussion. Life Management Platforms are much more than just data stores; there is much in it about how to ensure the secure and privacy-aware use of personal data – e.g. not just storing, but using them the right way and enabling new (and improved) forms of business.

IIW is well run and is mature and consistently meets it purpose of quality discussion and advancement of personal identity issues.

IIW 14 topics were spot on, fresh and informative.

The biggest complaint I have about IIW is that there are no notes posted for many of the sessions.

The VRM Workshop was well attended and reflects the interest shown at the KuppingerCole EIC 2012 conference.

Perhaps this year we will finally see some products that are VRM oriented.